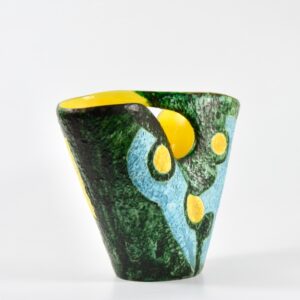 Vallauris pottery has a long and illustrious history. But it was Picasso who brought new fame to the French pottery town, when he began working with Suzanne and Georges Ramié at the Madoura pottery in 1947.

Jacques Sagan was one of them. He made this large and very sassy abstract vase, with its folded shape and contrasting decor on either side.

Sagan came to Vallauris in 1952, the same year as Roger Capron set up his Callis studio in the town. His life was almost as colourful as his pottery. In his past life, he had a performing poodle act in the Paris music halls – probably around the time he was romantically linked with Edith Piaf. There’s no business like show business…