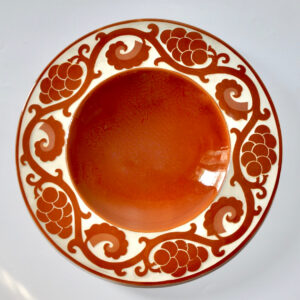 This splendid Art Deco charger by Roger Méquinion is a story in itself. It’s a fascinating example of the crossover between one medium (glass) and another (clay.) It’s also an example of the creativity that drove the Art Deco movement, a willingness to experiment and extend the boundaries of traditional materials.

Roger Méquinion graduated from the Paris Beaux Arts, before working at Lalique as its lead engraver.  At that time, the company was at the height of its success under René Lalique. It was involved in a string of prestigious commissions, including fitting out the ocean liner, SS Normandie and the Orient Express. Was Méquinion involved in these projects? We’ll ever know for sure. What we do know is that he would have been fully familiar with the current decorative techniques, including sandblasting glass.

Roger Méquinion’s career with Lalique was cut short in 1939, when Germany invaded France. Lalique suspended its production, and Méquinion found himself out of a job. He decided to head south to Aubagne, a major pottery hub in the Zone Libre – Vichy France. There, he struck up a partnership with Proceram, the largest of the pottery companies, and began designing high quality, Art Deco ceramics.

Vases and chargers by Méquinion appear in a variety of rich colours and motifs. The pure shapes allowed the strong patterns speak for themselves. The clay models were fired with glossy enamel, then decorated using stencils and precision sandblasting, along similar lines as for Lalique glass. Méquinion brought his own distinctive style to the pieces, an Art Deco style honed during his years at Lalique.

These luxury pieces are now prized for their quality and Art Deco good looks. They’re also very scarce since they were only produced for a short period – around 10 years. This gorgeous charger has now sold, but I couldn’t resist sharing a little of the story behind it.