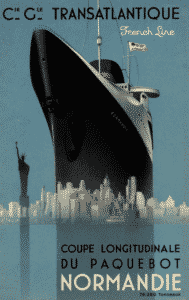 A century of style on France’s great ocean liners

You’re never too young or too old to be fascinated by France’s transatlantic ocean liners. The luxury, the glamour, the style, the spirit of adventure or the technical prowess… there’s something to seduce everyone.

In the last century, the Compagnie Générale Transatlantique (also known as The French Line) operated some of the finest passenger liners in history.

Two – the Normandie and the France – were legends – not least for their fabulous decor, representing the best in French decorative arts.

For 1st class passengers, a cruise to New York meant 5 days of unparalleled luxury. Famous passengers included the Beatles, Salvador Dali, Cary Grant, Audrey Hepburn, Marlene Dietrich… and even the Mona Lisa, on her way to exhibitions in the US.

The Normandie, an ambassador for French Art Deco 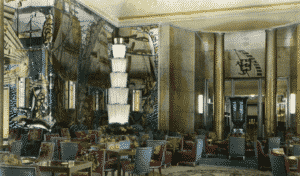 Of all the transatlantic liners, none set out to seduce like the SS Normandie. On her maiden voyage in 1935, she wasn’t just the fastest, most technologically advanced passenger ship afloat: she was a work of art.

An army of hand-picked artists and elite manufacturers were commissioned to decorate her. Jean Dunand created the monumental lacquer panels
that greeted passengers in the vast reception hall. In the 1st class dining room, the chatter of passengers mingled with the chink of Christofle silver (designed by Luc Lanel) on porcelain (Jean Luce) and glass (Daum). The ceiling dripped with Lalique. The walls were luminous with engraved glass panels, custom made by the Cristallerie de Compiègne, better known as Degué.

As a floating ambassador for French Art Deco, the Normandie is a reference for anyone who loves French antiques. Original items from the liner are extremely rare and tend to sell at specialist auctions.  However,  later pieces by ceramists and craftsmen who were involved in the adventure are more affordable, and the Normandie connection is considered a gauge of quality. 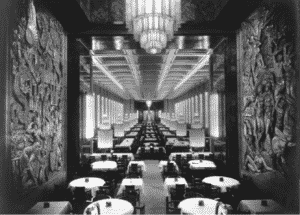 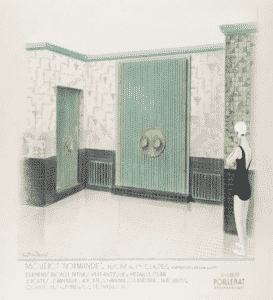 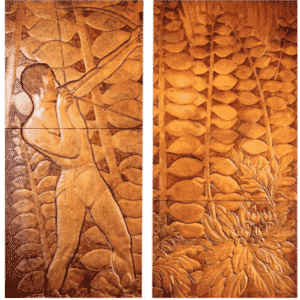 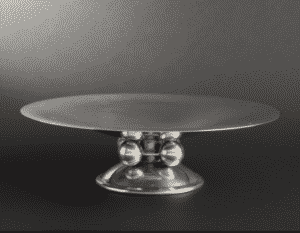 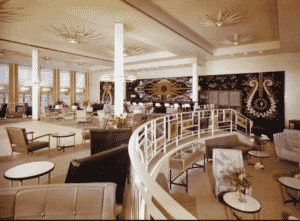 Nothing paralleled the luxury of the SS France when it was launched in 1962. The 1st class quarters were designed to showcase the ultimate in French refinement and art-de-vivre. The decor was resolutely modernist but carefully avoided avant-garde.

Two fires on board French Line vessels (see below) put an end to exotic woods and ivory. Steel and aluminium – inflammable and lightweight – were the new stars now.  Henri Lancel used tortoiseshell lacquered aluminium to elegant effect for the furniture in In 1st class. Clean lines and the ‘atomic’ influence dominated, and nowhere more sassily than in Gilbert Poillerat’s polished aluminium starburst lighting in the 1st class smoking lounge.

Like the Normandie, the SS France was a national symbol which struggled to make a profit. As mass air travel came of age, it became an anachronism. In 1979, a large, silent crowd gathered to watch as the France  was towed out of Le Havre for the last time. It was the end of an era.

There’s immense nostalgia for the France today and prices are likely to rise, as a new generation of collectors comes on board.

Below, a novelty ‘smoking chimney’ ashtray made by Verceram in the 1960s. The first SS France sailed from 1912 to 1932, apart from a brief stint as a troop carrier during WWI. She was known as the “Versailles of the Sea”.

Making her maiden voyage in 1927, she was one of a trio of Art Deco liners, along with the Normandie and the Lafayette. In 1941, she was moored alongside the Normandie in New York but escaped the fire. She  made her swan song in the 1959 film The Last Voyage, starring Robert Stack.

Originally the SS Europa, this German liner of 1930 was offered to the French Line after the Normandie was destroyed. Sumptuously decorated, she sailed from 1950 until 1962, when the new France came on stream.

Operated from 1930 until 1938, when she was catastrophically destroyed in a fire in Le Havre.

Sailed from 1932 to 1941, when she was requisitioned by the US. While being refitted, she caught fire.  Some elements of her decor found a home on the Lafayette.

The Normandie was probably the most luxurious passenger ship in history; her decor defined Art Deco at its height.

Launched in 1960, she was the pride of France – but the seagoing luxury she offered was already in decline. She sailed for 12 years, before being sold to the Norwegian Cruise Line. She was sold to be scrapped in 2006.